SPI, or Serial Peripheral Interface (see also my previous post) is characterized by a
master-slave architecture and, contrary to I2C or UART, doesn't have an official standard, so you have to check with the device manufacturer for the spcifications (for example, here's the Arduino documentation on the subject)

Connection is done using 4 wires; these are the most used pin naming conventions:

When starting a communication the Master configures the CLOCK (in a frequency supported by the device of course) than selects the device to communicate with using the SS line, by setting it to LOW

Many devices use a 3-state logic, i.e. another value other than LOW or HIGH, which is Z, or high impedance state, that makes the device "disappear" in the eyes of the master and, in all effect, have no influence on the connections; it's important when we have multiple slaves and we don't want influences or commands to/from other peripherals.

During a clock cycle the master can perform a full-duplex data transmission with the slave, as we can see in this awesome animation from AllAboutCircuits:

Besides the frequency we need to consider also the Clock Polarity, CPOL - if the clock idles HIGH or LOW and Clock Phase - CPHA, determines when data is transmitted relative to the clock:

There can be different configurations for SPI connected devices:

This is the easiest configuration, of course; in this case the CS pin on the slave device is alwaus grounded.

Probably the most common configuration, uses an independent Select Line for each slave, while the master activates only one chip select at a time. If the Master doens't have enough CS pins to manage all the slave we can use a multiplexer chip.

An advantage of this scheme is that you can control each device separately, allowing for connection of devices that require different clock schemes - in which case you can re-program the master SPI hardware module before enabling a specific CS so each slave understands the relative signal.

Note that in case of multiple slaves the MISO pin is shared, so we need connected devices that can work on the 3-state logic mentioned before (also, pull-up resistors must be used to avoid floating) since the slaves wich are not selected need to have an high-impedance output applied (if the device doesn't suport it a 3-state buffer chip must be used) 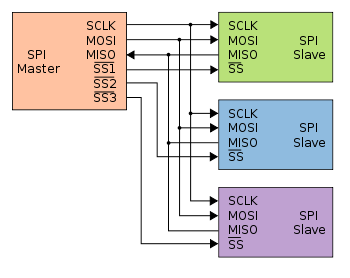 So called because multiple devices are wired together in sequence or in a ring, much like a garland of daisy flowers.

For further readings the [Wikipedia entry](https://en.wikipedia.org/wiki/Serial_Peripheral_Interface) goes deeper and gives a long list of pros/cons of this communication protocol.

If you want to suggest something, or find any error, please don't esitate to leave a comment 👇, I'll be glad to hear from you 😉

Other articles in this section:

No results for your search, please try with something else.